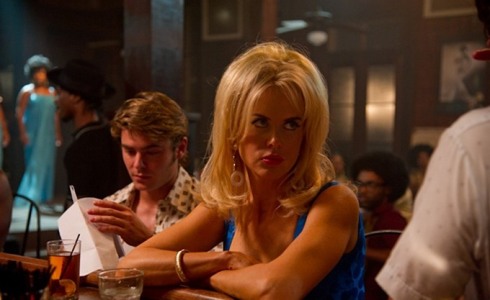 Article by James
Oh Nicole. How you manage to get these roles I have no idea. Someone is smiling down on you. Or, perhaps you’re screwing someone who is helping you out.

The ridiculously still in-demand Nicole Kidman returns to screens in late 2012/early 2013 with Director Lee Daniels’ latest offering, The Paperboy, after his sublime 2009 flick Precious. That’s right, she isn’t somehow turning up in Baz’s The Great Gatsby. Not even as a wooden banister, which would be fitting. Wise move Baz. But now she is being flashed all over the tabloids with “leaked” pics from filming as some old, scrawny slapper, crackin’ on to Zac Efron. Ewhhhhh. What one will do to keep in game???

But, while I can’t help myself re Kidman, and let’s not get me started that the abysmal chest-that-talks Matthew McConaughey who co-stars, I am interested in what Director Daniels does next. Its just he seems to have chosen very unwisely with his cast. You have two kiss-of-deathers involved Mate. The illustrious career may be over before it’s even begun. And what is with Efron gushing about his intimate scenes with Kidman? Cash-in-hand bribe?

The general spiel is as such…. “A reporter returns to his Florida hometown to investigate a case involving a death row inmate.” Indeed. Also starring the continuously hit-and-miss John Cusack, this production has catastrophe written all over it.

Im a freelance cowgirl! END_OF_DOCUMENT_TOKEN_TO_BE_REPLACED
This entry was posted on Thursday, June 14th, 2012 at 2:12 am and posted in Uncategorized. You can follow any responses to this entry through the RSS 2.0 feed.
« Snow White and the Huntsman
The Wolf of Wall Street! »