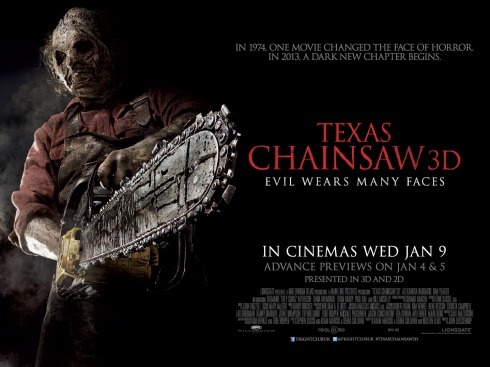 Article by James
Ok, ok, I know what you’re thinking… Another Texas Chainsaw Massacre re-make; but this one isn’t. Following previous remakes of the original and the ho-hum prequel of recent years, this year we see the release of an actual sequel to the original, which has been applauded by original Co-Writer/Producer/Director Tobe Hooper!

Texas Chainsaw 3D is the story following the first massacre in 1974, where the townspeople suspect that the Sawyer family are responsible. After a mob of locals burn their house to the ground, it is believed they have killed every member of the family. Decades later a young woman named Heather, learns that she has inherited a Texas estate from her grandmother. She decides to bring her friends along on the road trip to investigate her inheritance. On arrival she uncovers she has inherited a mansion but is yet to uncover the terrors that lurk in the basement below. You can imagine what happens next.

Already released on Jan 4th in the US, it is doubtful that this will get a cinema release here in Oz, but seriously, go check it out when it hits DVD. I will be!

Im a freelance cowgirl! END_OF_DOCUMENT_TOKEN_TO_BE_REPLACED
This entry was posted on Tuesday, January 8th, 2013 at 11:53 pm and posted in Uncategorized. You can follow any responses to this entry through the RSS 2.0 feed.
« And then there is this Crapola!
Mama’s Comin! »